For those of us who live down South, we know Southern food is so much more than fried chicken and biscuits. Within the whole of our region there are distinct cooking cultures influenced by generations of people from all backgrounds and access to different resources. We asked five writers to team up with their favorite chefs to pick one dish that represents the culinary traditions in their corner of the South. From Texas to Virginia, we are exploring five plates with a sense of place like Louisiana's gumbo and the Deep South's meat 'n' three. Each team delves into the history, the nostalgia, the complexities, and the beauty of each plate, and asks you to share in their traditions with recipes that honor the old and introduce new interpretations.

In this edition, Sheri Castle and Travis Milton, both perhaps their regions loudest cheerleaders, dive into a bowl of soup beans with a side of Sheri's homemade cornbread and Travis' spicy, sweet and sour chow chow.

For Chef Travis Milton and me, and scores of others rooted in the Appalachia, we would pick a plate of soup beans, cornbread, and chow chow as our deathbed meal. That's just as well considering we could eat enough to kill us.

Farming in the Appalachian Mountains is hard now, and used to be nearly impossible. The land is combative. In places you have to look straight up though the forest to see sunlight. The growing season is fickle and fleeting. The ground can be as rocky as a dry creek bed. The terrain is steep. I've heard old timers say that the easiest way to plant crops in the mountains is to load a shotgun with seed, stand on the porch, and blast it into the hillside. Farmers and families who dallied with crops that couldn't overcome those odds soon starved or left. Moreover, they faced perilous winter conditions not found elsewhere in the South, with weather and growing seasons more similar to Northeast than the coasts, deltas, and bayous. In order to survive, their food preservation skills were as critical as their farming and hunting skills. In short, they had to grow it fast, and make it last.

Given those conditions and exigencies, it's easy to see why dried beans, bread made from dried corn, and home-canned chow chow made from a homegrown garden would be essential. At one time, mountain families relied on this meal as an affordable source of sustenance. But most of us modern-day mountaineers no longer eat soup beans because we have to, but because we want to.

Those of us raised on soup beans never seem to lose our taste for them. They always taste of home. A pot of beans is reassuringly familiar. We can rely on their tender creaminess, the promise of sopping, and the traces of smoky pork, like the lingering scent of last night's campfire.

It's possible to eat soup beans, cornbread, and chow chow separately, but who would want to? The combination of flavors, textures, and aromas are perfect mates, as comfortable in my mouth as my accent, and perhaps just as likely to be misunderstood and maligned as something inferior. There's nothing to be said in response to that. There's no way to explain music to the tone deaf.

I once heard the late musician Doc Watson, who lived his whole life in Deep Gap, North Carolina, wax poetic about his love for soup beans with cornbread. He said that he could never get his fill. Doc put it this way: "If I ate twice what there was, it would've been half what I wanted." Amen, Doc. Let's fix us some.

Soup beans are not soup, but these slowly simmered beans are soupy, bathed in a rich, creamy, nutritious potlikker that's inseparable from the beans themselves. Each time soup beans are reheated, the beans get creamier and their liquid thicker, richer, and more delicious. This tolerance for reheating is part of their appeal. Even when freshly cooked, soup beans do not look good, but pretty has nothing to do with their beauty.

In the most liberal of strictest terms, soup beans can be made from any small dried bean, but for most mountain people, pintos are the only way to go. Like so many things, soup beans need fat and salt. The fat can come from good olive oil, but pintos prefer pork—a chunk of side meat, a couple slices of smoky bacon, or a good spoonful of bacon grease. Travis's soup beans are a tad fancier than those found in most homes, but they sure do hit the spot.

1. Pick through the beans to discard any chaff, funky ones, or pebbles, and then rinse them. Place in a large bowl and add enough water to cover to a depth of 3 inches. Let stand overnight, and then drain.

2. Heat the ham fat in a large saucepan over medium heat. Stir in the streaked meat and cook, stirring occasionally, until it renders, browns, and begins to crisp, about 10 minutes. Transfer with a slotted spoon to drain on paper towels.

3. Add the onion to the pot and stir to coat in the fat. Cook, stirring occasionally, until tender, about 5 minutes.

4. Stir in the beans, and pour in water to cover by a depth of 1 inch. Stir in the bay leaves, pepper, turmeric, salt, and hot sauce. Bring to a boil, reduce the heat, partially cover the pot, and cook the beans at a gentle simmer until tender and creamy, about 1 hour. Begin checking for doneness every 5 minutes after they have cooked for 45 minutes.

5. Discard the bay leaves, stir in the rendered meat, and check the seasoning. Serve soon, or cool, cover, and refrigerate for up to four days. The beans get softer and their liquid more creamy each time they are heated, which many people prefer.

Travis Milton is one of my dearest friends and I cannot express how much I enjoy eating his food, every mouthful a feast and a balm. His cornbread is fantastic, but I still like my cornbread better.

I have nearly come to fisticuffs with people I love over cornbread. We are, shall we say, particular about the particulars, agreeing on only two things: our absolute adoration of a well-seasoned cast-iron skillet and our absolute abhorrence of sugar in cornbread.

It seems to me that in the mountains, cornbread is our barbecue. There are all sorts of things called barbecue and endless ways to make it, but only a handful are truly worthy of the title. Further, each of us who takes cornbread seriously truly believes our way is the best and will eat cornbread from only the like-minded. I suggest never eating cornbread made by anyone who doesn't keep a jar of bacon grease and an ebony skillet within arm's reach of the stove.

1. Preheat the oven to 500°F. Place the fat in a 9-inch cast-iron skillet and heat in the oven for 13 minutes or until the fat is shimmering hot, almost smoking hot. Remove the skillet from the oven, reduce the oven temperature to 375°F, and leave the oven door open to help it cool down.

2. Add the butter to the hot pan, and when melted, scrape in the batter and smooth the top. Bake 35 minutes or until golden brown. Serve immediately.

It's an odd name for a thing that's not odd in the mountains. Chow chow is a staple on many tables, as essential and expected as the salt and pepper shakers. One of the defining flavors in mountain cuisine is vinegar, often delivered in tangy, judiciously spiced, and slightly sweetened pickled vegetable relishes. Chow chow is an inimitable, integral condiment, not a side dish or garnish. The role of chow chow is meted out a heaping spoonful at a time, there to perk up a plate of food that needs some acid, twang, and color—especially soup beans and cornbread.

Chow chow (a cousin of piccalilli and mixed pickles) is as much a common concept as universal ingredient list or recipe. Chow chow bats clean up in the end-of-the-season garden, when there's not enough of any one thing to put up, but too much to let go to waste, what some people call the garden orphans. Gardeners glean the last of the peppers, cabbage, assorted sweet and hot peppers, poke around for the straggling ears of corn, and pluck the rock-hard green tomatoes off the vine before the first big frost or hard freeze gets them.

Families who made multiple runs of chow chow over the span of three or four weeks wound up with a gallery of jars that revealed a slow time-lapse of summer fading into fall in their little spot in the world, as specific and yet vague as a map dot.

Texture is key to chow chow. The vegetables should be finely chopped, but not pureed, so that they turn tender when simmered, but not dissolve into mush. Hand chopping and box graters are preferred because food processors do their job too well. No one appreciates mealy-mouthed chow chow.

1. Toss the first 8 ingredients with the salt in a large bowl and refrigerate overnight. Drain well and pour into a large pot.

3. Place the chervil, thyme, bay leaf, and peppercorns in a square of cheesecloth and tie with a piece of kitchen string to form a sachet, and add it to the pot.

4. Bring to a boil over medium-high heat, stirring until the sugar dissolves. Reduce the heat to medium and simmer for 40 minutes or until the mixture is thick and syrupy. Discard the sachet.

5. Pack hot chow chow into hot, sterilized jars. Run a wooden skewer around the inside of the jar to release any air bubbles, and cover tightly. Store refrigerated for up to three months. For longer shelf-stable storage, close the jars with new, sterilized lids and rings tightening fingertip tight, and process in a boiling water bath canner (212° F) for 10 minutes. Promptly refrigerate any jars that do not seal.

Note: Travis swears by the fruity flavor of the Espelette peppers he grows for his chow chow, but other small, red sweet-hot chiles will do. 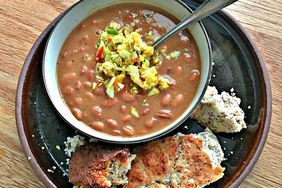 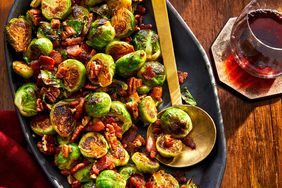 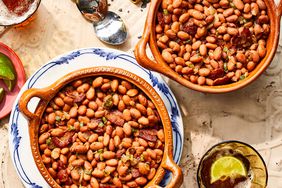 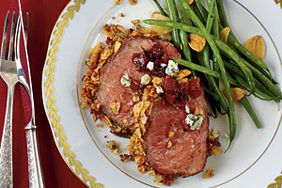 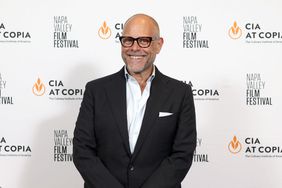 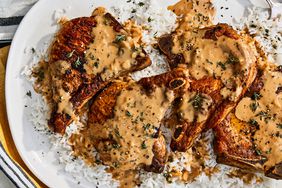 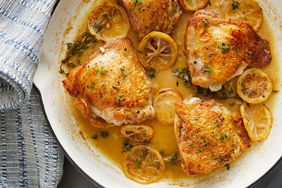 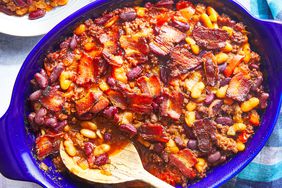 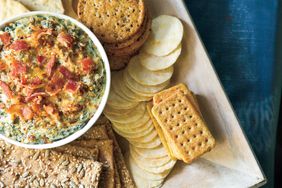 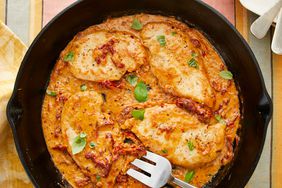 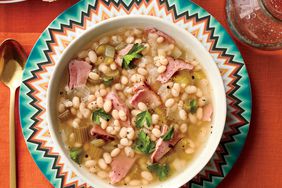