These all-star pitmasters are “divided by sauce; united by coals.”

Some of the biggest names in Carolina barbecue are teaming up for a one-day extravaganza celebrating all things pork.

Themed "From Palmettos to Long Leaf Pines," the first-ever Carolina BBQ Festival is the brainchild of Lewis Donald, the owner of Sweet Lew's BBQ in Charlotte. The May 22nd festival will include an all-star lineup of pitmasters on a mission to represent North and South Carolina's three regional styles of 'cue. We're talking vinegar, mustard, and red sauce, oh my!

A $75 general admission pass unlocks four hours of beer, live music, and a culinary tour of the Carolinas.

"It's barbecue-focused. The beer and music are secondary," Donald told Axios Charlotte. "It's continuing the heritage. One of our slogans is 'Divided By Sauce, United By Coals.' Yeah, we may use different sauces, but we're all doing the same thing. It's mass production barbecue vs. slow and steady. We're slow and steady."

WATCH: How Pulled Pork Took Over the South

The Carolina BBQ Festival will take place from noon-4 p.m. at the Broileryard at Camp North End in Charlotte on Sunday May 22, 2022. See you there! 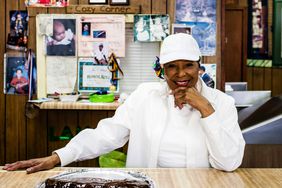