Though we wouldn't blame you if you did.

There's something about digging into a pile of barbecue with your girlfriends that makes you want to take some home. Part of it's the feeling–the ease in which pretty made-up faces surrender to the smear of sauce in the name of smoked meat and chit chat. But so much of it's the taste.

After eating our weight in pit-smoked chicken, hush puppies, and pie on a girls' trip last spring, I found myself standing at the front counter of Buxton Hall Barbecue in Asheville, North Carolina. I eyeballed the t-shirts and bumper stickers searching for a memento that would survive the five-and-a-half-hour drive home. Not that my husband would have minded a wood-smoked scent settling into my car, but a hash plate to-go just wasn't happening.

I landed on one of the best souvenirs I've ever gifted: Buxton Hall's bottled barbecue sauces. The exact sauce was tricky to pick thanks to our excessive sampling over lunch. But since I was heading back to Alabama, I couldn't help but grab a white sauce for comparison's sake.

Almost a year later, my husband is nearing the last drop. For the life of me I couldn't tell you how he's made it last this long (or if it's even safe to still be eating it); it graces our table weekly. The tangy, smoky sauce best known for pulling together Buxton Hall's fried chicken sandwich pairs with everything from grilled chicken to French fries at our house.

Over dinner, while he dipped into one of the last servings left, I suggested we buy some of the restaurant's rubs online to ease his loss. Instead he turned the bottle my direction and pointed at the label. The ingredients were all there.

There are no instructions or measurements, mind you, so I did a bit more investigating. Turns out, the restaurant's recipe is out there–no secrets. Wedged between his red barbecue sauce and mustard sauce in Chef Elliot Moss's Book of Smoke, you'll see it all spelled out. Better yet, Duke's mayo is preferred.

While I think my husband was somewhat disappointed he didn't get to crack the code on his own, not having to wait until our next trip to the Carolina's for another taste more than made up for it. Maybe we'll try to recreate their Ultimate Apple Pie recipe next. 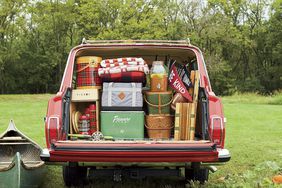 15 Fun Things To Do With Your Girlfriends This Fall