As we kick off a new year and a new decade, it's a good time to reflect on the state of barbecue we are leaving behind in in the 2010s and look ahead to the 2020s.

Each year brings countless lists ranking barbecue joints, including the two we produce here at Southern Living. In 2019 both saw repeats at the top. Southern Soul Barbeque of St. Simons Island, Georgia, snagged the top slot in our readers' poll for the South's Best BBQ Joints for the third straight year. Scott's Barbecue in Hemingway, South Carolina, retained the number one position in my own list of the South's Top 50 BBQ Joints.

Will their streaks continue in 2020? I can't reveal the results of the South's Best voting (which will be released in the print edition in April), but I confidently predict that the readers' picks this year will probably spark a few impassioned conversations. As for my own Top 50 list, based upon recent travels I suspect there's going to be a good bit of movement in the rankings, too.

Such changes reflect the overall theme that I've noted for the past few years: we're getting more good barbecue in more places, and the competition gets tougher each year. In fact, based upon the events of 2019 and what we can already see coming in the next few months, all signs suggest that the 2020s will be an era of barbecue expansion.

A big crop of new restaurants either opened in 2019 or have been announced for 2020, and they share some common themes. One is the phenomenon of restaurateurs who have established successful operations in one location starting to branch out and move to new territory, sometimes crossing stylistic boundaries in the process. Here are just a few of the well-regarded barbecue restaurants that are taking their styles to new cities:

Some pitmasters are going even farther, taking their distinctive styles far beyond the state where they got their start. Here are three making particularly long leaps:

Other restaurateurs are venturing not into new places but into different but related food genres. In particular, we're seeing a lot of pitmasters turn their attention to tacos and burgers, applying their meat-smoking skills to new preparations. Here are some of the more notable examples:

So what does this mean for the barbecue scene as we head into the 2020s? I suspect we are seeing a reversal in the remarkable trend that we witnessed over the past decade.

As the 2010s opened, barbecue was thriving but headed toward an uncertain stylistic future. A flurry of new barbecue restaurants had opened their doors, but they increasingly served the mish-mash of styles that John Shelton Reed has termed the "International House of Barbecue." Gas-assist cookers were the norm, and most new joints served everything from brisket to smoked chicken, with a half dozen sauce bottles on the table to please all palates.

WATCH: Have You Tried These Classic BBQ Sauces

But then we witnessed a remarkable revival of traditional barbecue. Celebrity pitmasters like Aaron Franklin, propelled by new social media platforms, made "craft barbecue" cool, inspiring a generation of pitmasters to try their hand with prime-grade brisket and wood-fired offset smokers. Soon young turks in Austin were competing head-to-head with the famous meat markets in towns like Lockhart and Taylor, and newly-minted barbecue junkies started making bucket list tours and discovering the old joints, too.

As classically trained chefs hung up their saucepans to open barbecue restaurants, they made road trips down to Texas to crib techniques and styles. It looked for some time like Texas-style brisket and sausage would overrun the South like kudzu and wipe out old native traditions, but as the decade progressed more and more pitmasters took interest in their own local styles, too.

Whole hog barbecue made a remarkable comeback in the Carolinas and Tennessee, and pitmasters worked to perfect their own versions of classic Georgia-style Brunswick Stew or South Carolina hash and rice. A new generation of cooks—some from old restaurant families, but many with no previous connection to barbecue—established thriving businesses and relentlessly honed their technique.

The result was a splendid period of craft barbecue, as more and more top-notch joints could be found in cities all over the South—and often in cities that didn't have much in the way of a barbecue scene before. As the decade progressed, those restaurateurs added more cooking capacity to handle ever-increasing crowds, creating high-volume operations that produce really good barbecue at scale.

And now those entrepreneurs are on the move, taking their large format restaurants to new markets. As whole hog barbecue begins competing with older rib joints in Alabama and New York-style brisket lands in Miami, consumers will have an increasing array of new barbecue options. Those options are expanding even more as pitmasters fuse barbecue with other genres, rolling pulled pork inside breakfast tacos and grinding smoked brisket into burgers.

We may well be on the way to another iteration of the International House of Barbecue—one that is much more meticulous about technique and quality but blurs regional boundaries all the same.

I'm not alone in this concern. In his retrospective on a decade of craft barbecue for the Houston Chronicle, J. C. Reid notes that pitmasters are "replicating unique, high-quality, small-batch barbecue in multiple locations and at high volume" and wonders whether the 2020s might bring "the beginnings of the commoditization of craft barbecue."

But I remain optimistic. Barbecue has consistently proven to be a stubbornly vibrant Southern food tradition. Yes, we likely will see a flurry of craft barbecue empires being staked out over the next few years. but there's bound to be another wave that comes behind that and really surprises us. I can't wait to see what that's going to be. 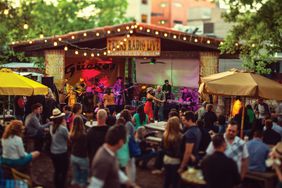