PAID CONTENT
This content was produced by The Foundry @ Meredith Corp. BHG editorial staff was not involved in its creation or production.
Advertisement

Let the Light In

Natural light has long been one of the most desirable aspects of a home. It turns out, there are scientific reasons behind the urge to live in a sunshine-filled space. 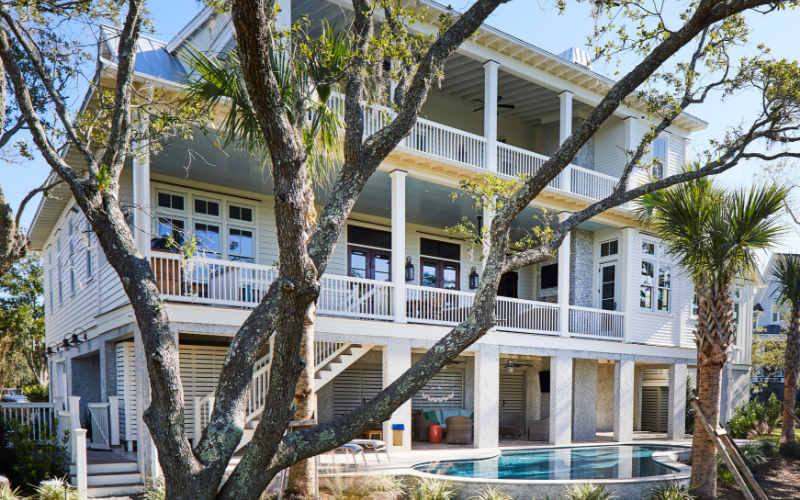 Before moving to Daniel’s Island in Charleston, South Carolina, the owners of the Max Crosby House were living in the Northeast and wanted to create a happier and healthier home for their family. They wanted their three children to experience a lifestyle where they could soak up the sun year-round. They found what they were looking for in a special spot overlooking a private dock in an expansive marsh, and worked with the Max Crosby Construction company to build their dream home.

They wanted a house that was full of sunlight, with plenty of outdoor space and unobstructed access to the marsh. In order to maximize the light and views, the builders utilized large, unobstructed windows and reflective interior design touches.

Now, the newly transplanted family is flourishing and enjoying all the benefits of natural light in their new home. Designing their home with light in mind resulted in unexpected benefits, like their wellbeing. 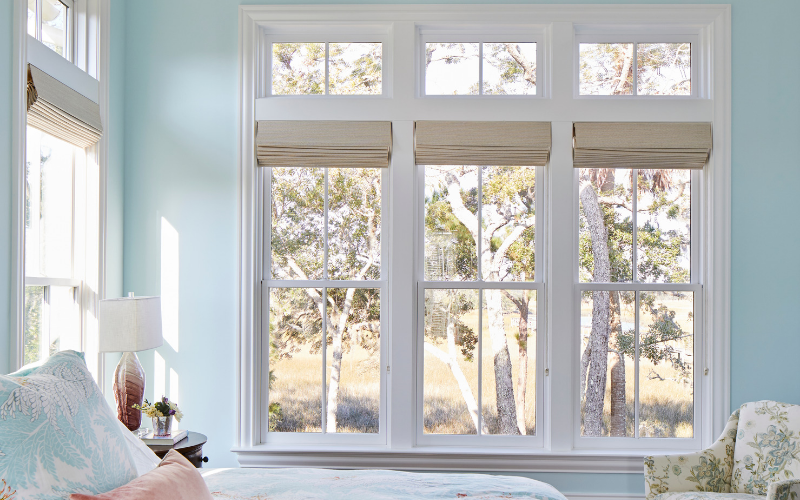 The amount of sunlight you receive during the day, especially in the morning, affects your amount of sleep per night. The light helps to regulate your biological clock—telling your body to stay alert during the daytime, and rest up at night. The master bedroom in the Max Crosby House allows for a lot of early-morning light due to its 18-foot-high vaulted ceilings, and its three large Clad Ultimate Double Hung Next Generation 2.0 Marvin Windows. In order to let in even more light, Max Crosby Construction Company Interior Designer Widney Pierson chose light woven shades, and she didn’t cover the transom, which is the extra panel of glass above nearly every window in the house. Pierson used bright white and teal paint in the master bedroom to further reflect the light. “It’s a happy, bright space,” she says. 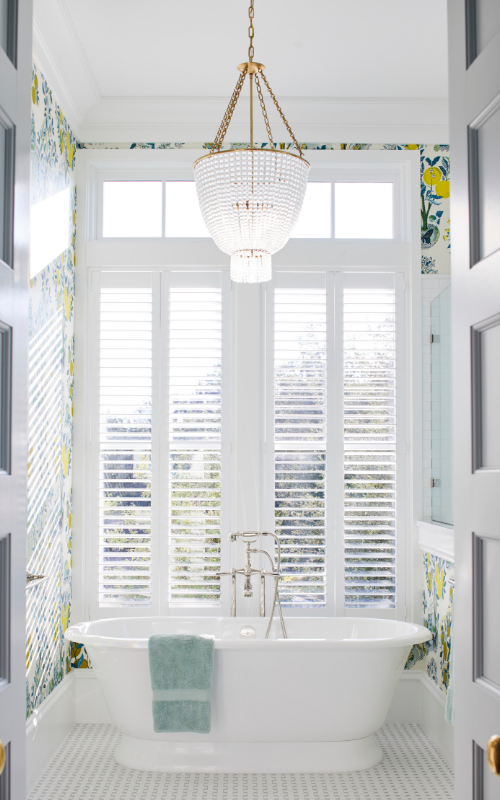 When exposed to sunlight, the skin absorbs vitamin D, which reduces the risk of heart disease, weight gain and depression while preventing bone loss, among many other benefits. Yet most people are deficient in the nutrient due to lack of exposure to sunlight. The good news is that Vitamin D doesn’t discriminate based on whether you get your sunlight indoors or out. From the outset, Max Crosby Construction Company President Jamison Howard thought about light when designing the house. He situated the master bathroom at the front of the house, for example, so it fills with bright sunlight in the morning, when the owners are getting ready for their day. And he installed the same windows from the bedroom in the hallways, a space that’s generally dark, so that the family members are exposed to healthy vitamin D from nearly every corner. 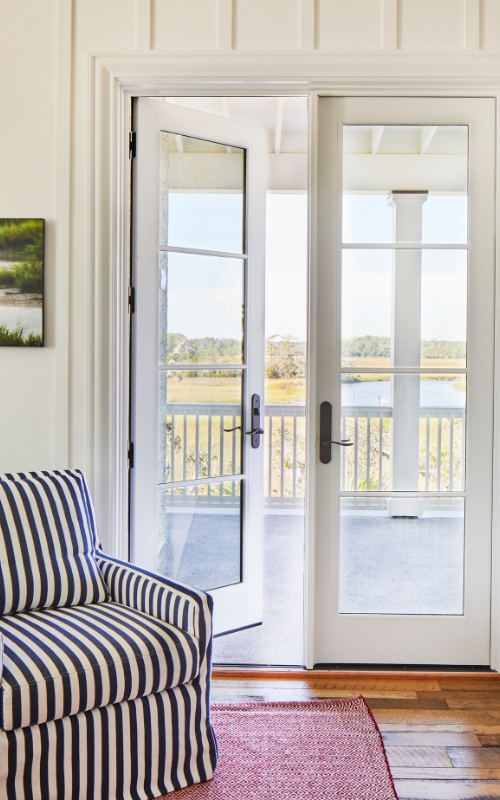 You might notice that you’re in noticeably better spirits after a day spent in the sun. Turns out, there’s a scientific reason: People have higher serotonin levels on sunny days, regardless of the season, according to an Australian study. The owners of the Max Crosby House decamped from the Northeast because they were attracted to the outdoor lifestyle they found in Charleston, where they could ride bikes and golf carts around their community year-round. So when it came to building their house, it was important for “the connection between indoors and outdoors to blend seamlessly,” explains Howard, who left most windows uncovered for extra light and unfettered views of the marsh in the back. 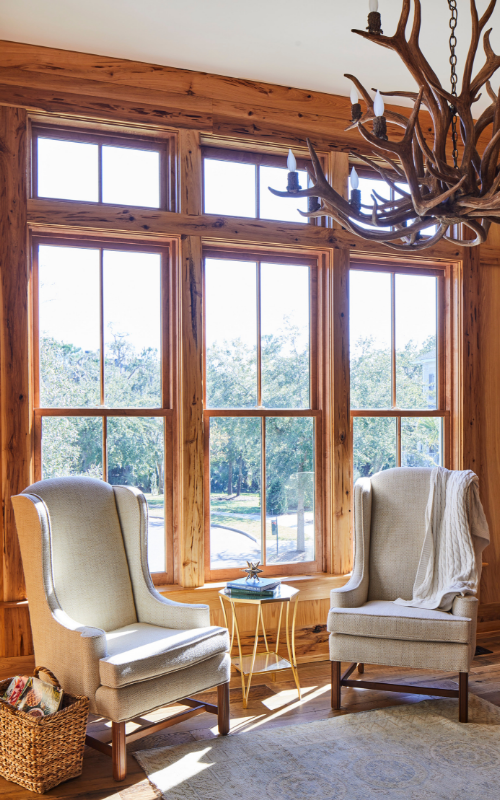 Studies have shown that employees exposed to natural light have higher levels of energy and productivity. The light-filled office in the Max Crosby house, then, is a model workspace, with four uncovered Clad Ultimate Double Hung Next Generation 2.0 Marvin Windows with maple interior, plus transoms. While the office is incredibly bright, it’s also warm and inviting due to the natural wormhole cypress wood-paneled walls, a look that was inspired by the community’s clubhouse.

When installing windows throughout the house, which would remain uncovered by shades or curtains, Howard chose Marvin Windows for the clean lines of the window’s profile, including the concealed jamb liner. “You can’t find anything that looks as finished with any other brand,” says Howard, who also prefers Marvin Windows for their superior impact glass, crucial for this hurricane-prone coastal area. “As a builder, the window choice is an important one because they will be there for the lifetime of the house,” Howard points out.

The windows, then, not only provide wellness benefits, but thoughtful details that will be appreciated for generations to come. Indeed, the connection to the light and the outdoors has truly changed how the family lives and spends time together—much of it in the sunshine.

this link is to an external site that may or may not meet accessibility guidelines.