Beloved by Southerners, these flowers captivated one of our greatest writers.

Eudora Welty dreamed of camellias. More specifically, she once had an all-night dream in which she watched “all the billions of camellias in the world” gradually narrow down to millions and then hundreds. It continued until she saw only one, the original.

The literary genius from Jackson, Mississippi, detailed the dream in a 1941 letter to her agent, friend, and fellow gardener, Diarmuid Russell, which was collected in Julia Eichelberger’s Tell About Night Flowers: Eudora Welty’s Gardening Letters, 1940-1949. Even though Welty’s fiction is filled with flower references, her letters—like the blooms she carefully cultivated—reflect a level of horticultural expertise that she often attributed to her mother, Chestina Welty, not herself.

She traveled far and wide but lived most of her life in a house built by her parents on Jackson’s Pinehurst Street and still referred to the well- designed outdoor spaces there as her mother’s garden long after Chestina’s death in 1966. The author went so far as to call herself, with typical humor, “my mother’s yard boy.” But her plant knowledge and her passion for certain flowers, camellias most of all, were undeniable.

“When she was living in New York, her mother would send camellias by express train from Jackson, and they would arrive the next day,” says Jessica Russell, director of the Eudora Welty House & Garden. “Chestina would wrap them in wet cotton so her daughter could have them in her apartment in the city. Years later, after Welty returned to Jackson, she would send these same beauties to her literary agent in New York, just as her mother had done for her. She thought they were very special.”

Welty’s mother designed the garden in 1925 as the family’s new home was being built. Over the years, the duo tended it together. “Welty was really more of a plantswoman than a designer,” Russell explains. “She loved all of her flowers individually and pored over reference books and catalogs.”

It was the author, Russell says, who filled the “camellia room” in the Welty garden with Camellia japonicas, planting and grafting some 30 different cultivars. There are now about 50 of the colorful evergreen shrubs in the garden, including some early bloomers at the front of the house that were planted by Welty at her mother’s request.

She amassed her collection from a variety of sources, like the Mississippi Market Bulletin and her favorite shops, Russell notes. The late nurseryman and renowned camellia propagator Kosaku Sawada bred some of the plants featured in the garden. And then there were those purloined clippings: Welty was known to carry a pair of shears in her car and snip a cutting or two off beautiful old plants she saw while driving by.

But no matter how many camellias she discovered, there was one she held above all the others. “Her favorite was ‘Leila,’ and it has a romantic story,” says Russell. “It was a present to Welty from John Robinson, with whom she had a decade-long relationship. Both of them were authors and intellectuals who liked camellias and planted or grafted them. He was a fighter pilot during World War II, and she worried about him throughout the war, watching over his plants when he was away. Before his deployment, he gave her this shrub. Its more common name is ‘Catherine Cathcart,’ but Welty called it ‘Leila.’ ”

In 1994, some seven years before the author’s death, Susan Haltom was working with the Mississippi Department of Archives and History when she was asked to lead a restoration of the garden. It would become a years-long labor of love that was detailed in One Writer’s Garden: Eudora Welty’s Home Place, which Haltom coauthored with Jane Roy Brown. Great care was taken to thoughtfully revive what a mother and daughter had created together rather than replace it with something grander.

“The Welty garden is open to the public,” Russell says. “It’s not walled off from the community, so we often see students reading, couples taking pictures on dates, and even proposals—it’s very welcoming.”

As for the camellias themselves? “The story continues. All these years after Welty’s passing, her plants live on and still reproduce. Besides preserving the specimens she planted, we are witnessing a new generation of one-of-a-kind camellias descended from her originals,” notes Russell. “They are our living connection to her.”

The garden that Welty nurtured with her mother now showcases around 35 unique camellia cultivars, eight of which are pictured here. Beyond striking awe with their annual explosion of beauty and color, a couple of the carefully tended plants were referenced in some of the author’s most noteworthy fiction.

A pure white flower is more typical for an ‘Elisabeth,’ but the bush in the Welty garden sports, or mutates, resulting in several different colors.

This rose pink gem is at the heart of Welty’s Pulitzer Prize-winning novel, The Optimist’s Daughter, and embodies one of the story’s main themes.

Kosaku Sawada’s wife brought 500 seeds to America from Japan as her dowry, which led to his great success with camellias. He first planted ‘Victory White’ in 1931.

This camellia came to America by way of Charleston, South Carolina’s Magnolia Plantation and Gardens, home to the country’s oldest public gardens.

In Welty’s novel Delta Wedding, Lady Clare Buchanan has red hair and gets chicken pox. She was named after this camellia—the reddest variety in the garden.

Welty planted this early bloomer next to the steps at the front of the house to provide a pop of color at the beginning of the season.

‘White Empress’ is distinguished by a large cluster of central stamens that are typically not interrupted by petaloids in the middle.

Her most cherished plant was a present from fighter pilot and fellow writer John Robinson. She fell in love with him as well as this flower.

The Eudora Welty House & Garden is a recognized stop on the American Camellia Society’s Gulf Coast Camellia Trail. The flower’s season in the Welty garden runs from November to March, typically peaking in February. The garden is free, but entering the house requires a ticket. 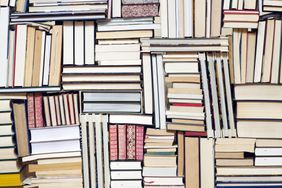 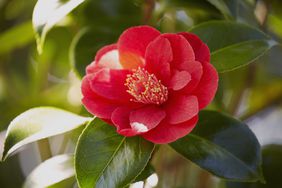