Sallie Ann Robinson has just one rule when preparing the Gullah cuisine of her childhood: Keep it simple. “Less is best,” she says. “When you’re cooking with fresh ingredients, you don’t need much of anything else.” Robinson would know. Born on tiny and remote Daufuskie Island, South Carolina (accessible by boat only), the chef and cookbook author was raised on a diet of almost entirely homegrown bounty, from the vegetables and poultry to the fresh-caught fish and crab. Today, she’s among just a handful of native Gullah—a term which refers to the descendants of African American slaves who settled in the Lowcountry—who remain on the island.

Part personal narrative, part culinary and cultural archive, her newest cookbook, Sallie Ann Robinson’s Kitchen: Food and Family Lore from the Lowcountry, documents the variety of dishes passed down through Gullah families for generations, from “Down-Home Red Tada Sallet” to Robinson’s Grandmomma’s Seafood Gumbo. “Nobody ever wrote anything down when they cooked—recipes were passed down simply from observing and then doing,” says Robinson. “My hope is to continue the legacy of a way of cooking that makes me proud. And that’s why I write cookbooks.”

SL: You come from a long line—six generations—of Gullah residents on Daufuskie Island. What was it like growing up there?

As a native who grew up on the island not knowing she was Gullah because it wasn’t in our vocabulary until the ‘70s, we didn’t see our way of life as different. It wasn’t until I left that I understood how special it was—the freedom, the community, the pure joy we felt from living off the land. Everything was done as a community. We raised chickens, we raised pigs. If one person said they were going fishing, a whole bunch of people would gather at the dock with their fishing poles or homemade lines. It was hard work, but that was also part of having fun as kids.

SL: How has the community changed since you were a child?

It’s extremely different because unfortunately most native Gullah people have left to find work or education on the mainland. The houses they grew up in are now deteriorating due to lack of maintenance and folks aren’t able to come back. So, part of my mission when I came back here permanently was to help restore these homes, which is why I started a nonprofit to support [the cause]. Because once those houses are gone, a lot of the history goes with it.

SL: You’re also preserving the history of Gullah culture through cooking. How would you describe what traditional Gullah food is?

It’s belly filling, put a smile on your face good! Everything we had was natural and fresh—from the organic vegetables we grew in the garden to the wild game we raised in our backyard—and it was all prepared with so much affection. And you had to love what you were doing because when you’re cooking authentic Gullah cuisine, there are no shortcuts. I learned to cook on a wood stove and it required patience. We did what you call “slow cook” and that adds a lot of flavor to the food.

SL: Are there any cornerstone ingredients or seasonings that Gullah cuisine uses to add flavor?

It was really all about the freshness of what we were cooking with. Homegrown vegetables like peppers and onions were key ingredients. We did use salt and pepper but we lived by the rule that less is best—you need just enough to enhance what you’re making. Garlic was also one of our key seasonings. My mom would grow it around her flowers to keep the deer away.

SL: You call yourself the “Gullah Diva.” What’s the meaning behind the name?

When I hear the word “diva” I think of someone who has pride and respect and who does things with perfection. I started writing cookbooks to perfect and preserve the memories of the food that I grew up with so that our way of doing things—which is the same way my ancestors did things—wasn't lost. When I published my first cookbook, I had a recipe for fried ribs, and I just remember so many people being surprised that you could fry ribs. But that’s the way I always had them growing up—and they’re so good!

SL: Are all of the recipes in your cookbook based on traditional Gullah dishes?

All of it is based on what I grew up on, even down to desserts like my Blackberry Dumplings. Berries grew wild on the island, and we’d spend hours picking them so my momma would make these for us. A few recipes I’ve put my own twists on: We didn’t grow up eating turkey burgers (my mother always used beef), but I find ground turkey to be a nutritious part of a good diet – and they turned out so well.

SL: Your website says you host Gullah-themed cooking classes. How do we get in on this?

I do! I cater, and I try to keep a minimum of eight or more people when I do, but while I’m preparing a meal for an event, I’ll invite people in to watch or help. I can talk, walk, and laugh while I’m cooking, so it’s fun for me and hopefully people can learn from it. I always let guests pick the menu, but I will say: People love my fried ribs! 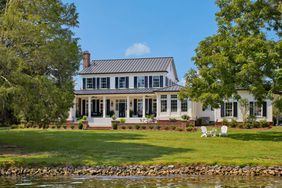