A Southern-bred pup was named top dog in the 21st American Kennel Club National Championship Presented by Royal Canin. Four-year-old Bayou made history as the first-ever Giant Schnauzer to be awarded the coveted Best in Show prize. Bayou was born in Port Allen, Louisiana, but resides in Houston, Texas, with professional handler Alfonso Escobedo. He beat out 5,000 of the nation's most impressive show dogs to earn the title.

"We are thrilled to have crowned Bayou as America's newest champion out of more than 5,500 dogs that competed at our show," AKC VP of PR and Communications Brandi Hunter Munden told Southern Living. "The Giant Schnauzer is an excellent breed and his win just introduced the breed to a whole new audience of dog lovers."

Owner Chris Reed said he didn't go into the competition, held December 18-19 in Orlando, Florida, and broadcast January 2 on ABC, with great expectations. Though Bayou was the top-ranked dog of his breed, a Giant Schnauzer had never won before. Reed said their team's goal was to make the shortlist and possibly win their breed competition, but they didn't expect much past that.

"Once we [made the shortlist], everyone relaxed a little bit including Bayou and his handler Alfonso," Reed told Good Morning America. "When he went into Best in Show, we were just happy to be there, and I think he showed really well because he didn't have anything to lose."

When it came time to award Best in Show, Reed thought Bayou might have a shot at fourth. After the fourth and third place dogs were announced, he figured their run was over. But Bayou's achievements were just beginning.

"I sat from the end of the Working Group until Best in Show basically in disbelief," Reed said in a release from the AKC.

Bayou, show name GCHC CH Lagniappe's From The Mountains To The Bayou, had risen to the occasion, taking home $50,000 as the nation's top dog. His name represents his breeding as the pup of two Ingebar Giants from across the country. His father is owned by Mike and Laurie Mason, who live near the Rockies in Colorado. His mother Sarah is owned by Chris and his wife Holly in Louisiana. His kennel name Lagniappe means "a little something extra."

Bayou, who was the only puppy in his liter, certainly has that. And thanks to plenty of hard work from his owners and handler to keep Bayou groomed, trained, and at the top of his game—plus countless hours of conditioning for Bayou—that "something extra" has paid off.

Though social, loyal, and ultra-protective, Giant Schnauzers can have a mischievous streak, Reed said. Bayou is no different. During his first show at six months old, a judge kicked him out of the competition after he refused to stand still for judging.

"They are very much thinkers, and if you're not the leader in your household, this dog is fully willing to step up and take that role," Holly Reed told the AKC.

Bayou has certainly come a long way since his early days of getting thrown out of competitions. Reed said since Bayou is still in training, he didn't receive any special treats for his big win. But he did get plenty of extra pets for being such a good boy! 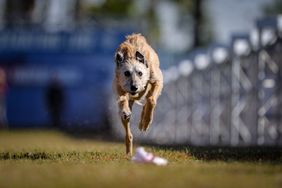