The Queen came to Cash in a dream.

After 70 years on the throne, Queen Elizabeth II was one of the world's most recognizable people when she died Thursday at the age of 96. Some might argue she was the most famous person on the planet for the majority of her history-making reign.

The long-serving monarch touched and inspired countless people in her life, including, as it turns out, the one-and-only Johnny Cash.

In a 2002 interview with Larry King, the Man in Black revealed that "The Man Comes Around," the title track from his last album, was actually inspired by a dream he had about Queen Elizabeth. Cash said that in the dream, the Queen relayed a mysterious message when the two ran into each other in Buckingham Palace.

"There she sat on the floor and she looked up at me and said, 'Johnny Cash, you're like a thorn tree in a whirlwind,'" Cash recalled to King. "I woke up and thought, what could a dream like this mean? I forgot about it for two or three years, but it kept haunting me. I kept thinking about how vivid it was."

"I thought maybe it was biblical," the crooner continued. "So I found it… something about whirlwinds and thorn trees in the Bible. So from that, my song started."

Though Cash, who was in the Air Force at the time, traveled to London for Queen Elizabeth II's coronation in 1953, the two never met. 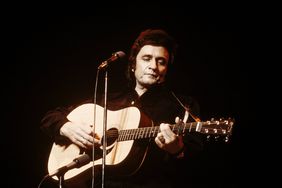