We talked to Tapp 18 owner Tabatha Powe about the life-changing experience.

Having her struggling boutique featured on Ben and Erin Napier's Home Town Takeover in May 2021 has been an absolute game-changer for Tabatha Powe.

"I go from a store that was on the verge of closing that sold out in less than 24 hours," the mom of four told Southern Living a week after the episode premiere. "That's what you call a miracle."

In the HGTV series, the Napiers completed 12 renovations throughout Wetumpka, Alabama, including Powe's downtown store, Tapp 18. With a logo redesign and a décor overhaul, the couple breathed some much-needed life into the floundering business.

"They're so good at what they do," Powe said. "It's so easy to trust them. They're some of the greatest people I've ever met in my life."

But the renovation was just the beginning. Less than 24 hours after Tapp 18 was featured on the show, Powe woke up to some unexpected news: her website had sold out overnight.

"What do you mean sold out?" she remembers asking the man who runs the site. "I don't know what those words mean."

Swamped with orders, Powe was in over her head. Fortunately, Shellie Whitfield, the executive director of the Wetumpka Area Chamber of Commerce (and the owner of the Big Fish House!), was already on her way.

"Shellie was there in two seconds," Powe recalled. "She pulled her phone out and started calling in the cavalry. She knew exactly who to call."

Area business owners rushed to Tapp 18 to help Powe fulfill the avalanche of orders. Even the local dog groomer dropped what he was doing!

Powe told Southern Living that she couldn't have done any of it without the town's support.

"This is the reason why community is so, so special. Let me say, they're competitors. We all own boutiques," she said. "But for them to leave their stores, to come here the entire time and then come back the next day, and the day after that… It's been such a joy. I'm so glad to be a part of something so special."

With a profitable store for the first time in six years, Powe can't thank the Napiers enough.

"I'm so grateful to Ben and Erin," she said. "Without them coming to this little city, there is no way in the world my shop would be like this right now. Ben and Erin changed my life. They really did." 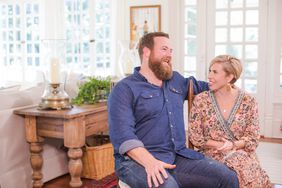