"If anything ever happens to my mom, Eric is who I'd want to live with.”

Most teenage boys who spend their summers mowing lawns do it for pocket money. But Tyce Pender doesn't want a new bike or video games. The 14-year-old from Cayce, South Carolina, just wants an official father.

Tyce recently started a lawn care business to help his stepfather Eric finally adopt him and his brother.

"He's been a father figure to me since I was 2," Tyce told Today. "He's always been there for us and helps me with anything I need like homework."

His mom Marcy and Eric have been together since 2010. They've discussed the possibility of Eric adopting Tyce and his brother Tylee, 15, for years. The family recently hired a lawyer who will work on the case pro bono, but other fees will still cost them thousands of dollars, Today reports.

But Tyce wasn't about to take no for an answer.

"This is important because Eric teaches me respect, independence, and what a man is supposed to be," Tyce explained to Today. "If anything ever happens to my mom, Eric is who I'd want to live with."

Marcy helped him purchase a $192 battery-powered lawnmower. Then, the teen entrepreneur went to Facebook to spread the word about his new business.

"It's a powerful thing that Tyce wants to give this recognition (to his stepfather)," Marcy told Today.

So far Tyce has done almost 30 yards. He doesn't have an official price list because he prefers to negotiate with customers based on what they can afford. Sometimes Eric, who works nights, joins him and they tackle lawns together.

Eric told the outlet that he and Marcy will cover the majority of costs associated with an adoption.

People in and around Cayce can book Tyce's services by reaching out to him on Facebook. He is also accepting donations via Cash App: $TycePender. 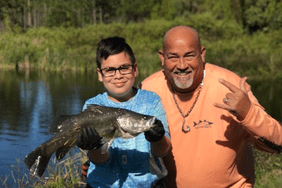