Nearly all of your novels are set in coastal North Carolina. What does the Southern landscape add to your storytelling?
This is a geographically beautiful area of the country, with beaches, wide, slow-moving rivers, and trees draped in Spanish moss. It's blessed with true seasons, including a very long spring and a very long fall. And there are no big cities, only small towns with a slow pace. There's a romance that makes it a great back-drop for a love story.

Your books are full of great acts of love. What's the most romantic gesture you've ever done for your wife
When we got married I couldn't afford a nice wedding ring. After I sold The Notebook the only thing I really wanted to buy was a new ring for my wife. So I did. And then I got down on my knee and said, "I don't know where life is going to take us from here, but there's no one I'd rather take the journey with than you."

What inspired The Lucky One?
It's the only novel l've ever written where the story was inspired by an image I found. In eastern North Carolina we're surrounded by military bases. I was struck with the idea of a soldier finding a woman's photograph in the desert sand, regarding it as his lucky charm, and ultimately deciding to find that woman.

You've created leading men that make women swoon. What's the secret?
They're Southern gentlemen full of kindness and integrity. Most of all, these are guys who, when they fall in love, feel it as deeply as the women. They are committed to the relationship, no matter the ups and downs that will inevitably come.

What's your favorite Southern city—other than the one you live in?
I really love Savannah, Georgia; Natchez, Mississippi; Charleston, South Carolina; and Williamsburg, Virginia. I appreciate the effort those cities take to keep their history alive.

What's your favorite set-in-the-South novel?
Boy, there's any number of them. I guess I would have to say To Dance with the White Dog by Terry Kay. It's a great Southern novel with everything a novel should have—wonderful characters, fantastic writing, a story that draws the reader in, and an ending that leaves you breathless.

How do you take your barbecue?
Pulled pork with vinegar and red pepper.

What are your favorite Southern expressions?
You get some great ones like "holler" for "goodbye." But my favorite is "Don't get your panties in a bunch." lt makes me laugh when people say it.

What's the last thing you scribbled on a paper napkin?
I have napkins with ideas for stories jotted down that have yet to come to fruition 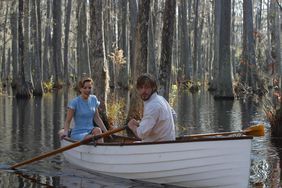 How to Take 'The Notebook' Tour of Charleston