The son of Alabama sharecroppers, Representative John Lewis of Georgia dedicated his life to advancing the cause of freedom and equality in America. As a leader in the civil rights movement of the 1960s, Lewis challenged Jim Crow segregation and oppression across the South through nonviolent protest. In 1986, Lewis was elected to the U.S. House of Representatives from an Atlanta district. During his more than three decades in Congress, Lewis was a formidable legislator who exerted moral and political leadership within the Democratic Party and who never forgot his activist roots. (1940-2020)

I have always loved history, and I have been fortunate and very blessed in my lifetime to participate in some of the human drama that became part of our nation's historical record. During my involvement in the Civil Rights Movement, I met remarkable men and women whose lives are inextricably tied to the historic sites of the Civil Rights Movement: people like Dr. Martin Luther King, Jr.; Rosa Parks; Rev. Fred Shuttlesworth; Pete Seeger; Myles Horton; Septima Poinsette Clark; the Little Rock Nine; and many others. When I was first elected to Congress back in 1986, I was assigned to serve on the Committee on Public Works and Transportation. Among the bills that I sponsored while I was there was one that established the Selma to Montgomery National Historic Trail, which designated U.S. 80, the route of the Selma-to-Montgomery March, a National Historic Trail. When people travel that highway, I want them to know what happened there just a few decades ago and how it happened. Then they may understand not just the steps we took but the distance we have come and the progress we have made as a people and as a nation. It will also help them comprehend the distance we still must travel to create a real "Beloved Community" in America—a nation and a world community finally at peace with itself.

Selma, Alabama, March 7, 1965
This bridge is where peaceful protestors shed their blood to help redeem the soul of America. On March 7, 1965, some 600 of us, led by Hosea Williams and me, attempted to march from Selma to Montgomery to dramatize the need for voting rights in Alabama. We were marching in an orderly, nonviolent fashion, walking two by two silently down the sidewalk, when we were confronted by armed and mounted Alabama state troopers. Our only request was to kneel and pray, yet we were teargassed, trampled by horses, and beaten with nightsticks. The suffering of those who marched in Selma that day—those who were beaten, trampled, and gassed—paved the way for the passage of the Voting Rights Act of 1965.

Birmingham, September 15, 1963
This historic and beautiful sanctuary was the home of many mass meetings and rallies. From here, students, religious leaders, and others would depart on their way to protest segregation in downtown Birmingham. On September 15, 1963, only 18 days after the March on Washington—one of the highest points of the movement—we experienced one of our deepest lows. A bomb placed under the steps of this church detonated immediately following Sunday school but before the main worship service started. That particular Sunday was "Youth Day," and the children were leading a service with the ironic theme "The Love that Forgives." Local segregationists so often used bombings as their primary tactic that the city was nicknamed "Bombingham." This bomb killed four girls who were fixing their hair in the bathroom. A fifth girl survived but was left blind in one eye. Dr. King called it "one of the most vicious and tragic crimes ever perpetrated against humanity." But it was because of the violence in Birmingham that we decided to intensify our efforts in Selma.

Washington, D.C., August 28, 1963
I was there at the Lincoln Memorial on August 28, 1963. That was the day that Dr. Martin Luther King, Jr., turned the marble steps of the memorial into a modern-day pulpit when he spoke out from the depths of his heart and soul about the challenges that faced America and said, "I have a dream." I will never forget that day. All of the speakers were deeply inspired and moved by the diversity of the crowd. It was amazing to look out from the podium and see more than 250,000 people. Some had even climbed into the trees to get a better view and to hear Dr. King define the central issues facing American democracy, not just for that day or even that decade, but for centuries before—and perhaps for centuries to come.

Greensboro, North Carolina, February 1, 1960
This scene makes the adversity we faced in the student movement real. When four African-American college students sat down to order at a whites-only lunch counter on February 1, 1960, they were refused service. The students were asked to leave, but they remained seated until closing time. And a movement was born. (Their section of the lunch counter remains on its original spot in the Woolworth Building, now home to The International Civil Rights Center & Museum.) Within two months, sit-ins were taking place in more than 55 American cities. Sometimes, people wonder why the lunch counter became such a powerful site of confrontation. It is because when people break bread together, they fellowship and communicate. The brutal system of Southern segregation depended upon separation. Once people began to engage with each other, share meals, and build friendships, it would become much more difficult to enforce separation. That's one reason why the lunch counter, an otherwise innocent setting for an often solitary experience, became a backdrop for struggle.

Little Rock, Sept. 25, 1957
In 1957, when I was 17 years old, I remember seeing the photos of the Arkansas National Guard and the angry mob threatening the nine African-American students who were only trying to enter Little Rock Central High School to get their education. President Dwight D. Eisenhower finally had to call out federal troops to escort the students into the building. They were so brave. I said to myself, "If these young people can do it, I can do something, too, to help win a victory for justice." Daisy Bates, the civil rights leader who helped guide the Little Rock Nine, once said, "These nine students rocked a city, and they shook a nation." Who knows how many people they inspired to protest for equality in America.

Photographer Art Meripol re-created some of the most iconic images in Civil Rights history with the same angles as the original photographs – and the result is powerful. Locations include the Edmund Pettus Bridge in Selma, Alabama; Little Rock Central High School in Little Rock, Arkansas; F.W. Woolworth Co. Lunch Counter in Greensboro, North Carolina; 16th Street Baptist Church in Birmingham, Alabama; and the Lincoln Memorial in Washington, D.C.

Many historical Civil Rights landmarks can be found in Birmingham, Alabama, where the city's tumultuous past helped to pave the way for a better future. On January 12, 2017, President Obama officially dedicated Kelly Ingram Park, the A.G. Gaston Motel, the Birmingham Civil Rights Institute, Bethel Baptist Church, and 16th Street Baptist Church as National Historic Monuments. These five Birmingham sites defined the Civil Rights Movement, and now will be officially protected and preserved by the National Park Service. Find a personal tour of these remarkable sites by U.S. Representative John Lewis in Southern Living's February 2017 issue. 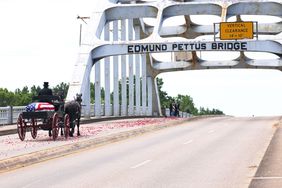 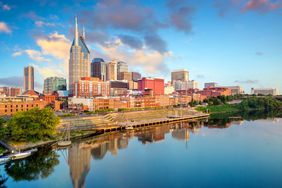 The Most Affordable Southern Cities for Your 2022 Family Vacation 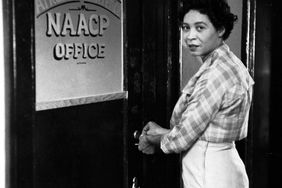