“I could not have picked a more perfect person to ask me.”

Country music stars Lauren Alaina and Trisha Yearwood have a very special bond. So, when the 57-year-old Grammy winner and television personality surprised Alaina at her recent Grand Ole Opry performance, emotions were already running high. However, when Yearwood revealed the reason for her surprise visit, the American Idol runner-up was truly at a loss for words.

Interrupting Alaina's four-song set, Yearwood took the stage and fulfilled a lifelong dream of the 27-year-old "Road Less Traveled" singer by inviting her to become the newest member of the Grand Ole Opry.

A stunned and extremely emotional Alaina immediately dropped to her knees, then spent several minutes gathering her breath before addressing the crowd and her longtime mentor.

"I have not cried like this in a really long time," Alaina said through joyful tears. "I guess I needed it. [Trisha] is literally my hero. I could have not picked a more perfect person to ask me. She calls me Junior. I'm in her phone as Junior, which is the coolest thing that's ever happened to me besides this."

In an interview, Alaina told The Tennessean that if she had to choose between winning an Emmy and being a member of the Grand Ole Opry, she'd choose the Opry every time.

"It's such a respectable thing in the genre that I love, that I was raised on, that's taught me everything about music," she said.

Yearwood reflected on her own country music career, while congratulating her fellow Georgian saying:

"This is a very special club to be in because you have to understand what the Opry means to be asked. It's so cool for me to be watching the show tonight because the man who asked me to be a member was Ricky Skaggs, who just sang. So, it's all come full circle for me tonight, too. I was so excited for you tonight because I know what it means to you. Country music is in good hands with you. Soak up every second and celebrate, celebrate, celebrate!"

Alaina, made her first Opry appearance at 17, just a week after being named runner-up of season 10 of American Idol. In the decade since, she has played the Opry more than 50 times. Opry Executive Producer Dan Rogers said she earned the invitation due to her "youthful exuberance and healthy respect for Opry traditions every time she plays the show."

This is not the first time Yearwood has shown her support for the young country star. Yearwood dueted with Alaina for "Getting Good," a song on Alaina's 2021 album Sitting Pretty on Top of the World. She also wrote the forward for Alaina's memoir and self-help book Getting Good at Being You and invited Alaina on her cooking show Trisha's Southern Kitchen.

The Opry will host an official induction for its newest member in early 2022. 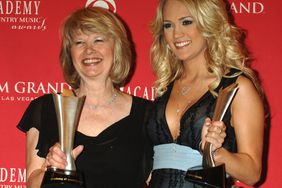