The iconic musician not only stars in this new festive flick, he will perform two original songs as well.

We are used to having our Christmas movies full of music. Be it jingle bells or carols, holiday movies generally contain their fair share of traditional tunes like "Rudolph, the Red Nose Reindeer," "Oh Christmas Tree," and "Silent Night." Sure, those are great. But this year, among the plethora of festive offerings from Hallmark's 41 brand-new, original holiday movies, we are getting one inspired by the 2015 album Christmas in Tahoe, by the band Train. A few members of the band's management team presented the idea to the folks at Hallmark, and while it took a few years to come to fruition, the film version of Christmas in Tahoe will premiere on the Hallmark Channel, Sunday, November 28 and stars Train's front man, Pat Monahan.

The Grammy-Award winner, who also serves as executive producer for the film, plays loveable, dependable Jackson, the concierge of a family-owned hotel, and best friend to Claire [Laura Osnes], the daughter of the hotel owners. Jackson's quiet demeanor is a far cry from a musician used to playing to sold out crowds. He recently spoke to Southern Living about working on this project.

"Once they put me in a purple sweater it was just like I can be whoever I want. It was the opposite of how I would ever dress for any humans to see me. And I think they got a kick out of it to be real honest with you. And then they gave me other sweaters that were equally as hideous," he said with a laugh.

"But Jackson, he's supposed to be a warm. I suppose even today it's hard to find people who care about a family business who are not the family. And so, I think Jackson, his character, kind of raised Claire in a way, and she's his boss and he never was offended that he's not her boss. He wants her to stay and be happy so he can continue his. And then the outcome is, because he did everything as the decent guy, maybe he got a chance at the end. His second chance."

Jackson helps Claire plan and pull off a powerhouse of a holiday variety show at her family's resort, and we learn along the way that Jackson has been hiding some special talent of his own—because of course you can't have a musician of Monahan's caliber and not get to hear him sing. That would be criminal. And this is a Hallmark movie, so there is a love story as well. Claire's ex-boyfriend Ryan [Kyle Selig] happens to be a famous musician in one of the biggest bands of the moment. He also steps in to help Claire with this variety show and we, the audience are treated to not one but two Train songs in this movie.

Monahan performs both "Shake up Christmas," from the 2015 album, and a brand-new song written just for this movie, "Mittens." Monahan described the new tune as, "it's more of a love song than a Christmas song but it just kind of fit because of the title 'Mittens,' and I don't know, it just sounds like a Hallmark movie to me."

While the movie was filmed mostly in Canada, the setting intended to be Tahoe. While they were filming in a fictionalized version of the California town, the real Lake Tahoe area was suffering from catastrophic wildfires. Because of this, Monahan will donate 100% of net proceeds he received for the film to Keep Tahoe Blue: League to Save Lake Tahoe, Tahoe's oldest and largest nonprofit environmental advocacy organization, which serves to protect and restore the environmental health, sustainability, and scenic beauty of the Lake Tahoe Basin. Learn more at keeptahoeblue.org.

For over 2 decades Train has been creating music that has become part of the fabric to the lives of countless people. Monahan's ability to write songs that can emotionally connect to so many in all kinds of different ways is a true gift, and one he recognizes.

"I was raised by people who, they would have never wanted me to take it for granted. And I think there was a time when I was about 30 that I kinda complained to my dad about something. And he said, 'man you don't get it.' And that's all it took, for me to hear from somebody I respected to say I didn't get it. Where I was given this thing, whatever it is to relate to people and be a positive part of their lives that I never didn't get it again. So I never take it for granted. I try to always respect it. And I was telling some friends of mine the other day that my job is to prove Train fans right and that's just what I'm going to keep trying to do."

If you are one of the many touched by the music of Train, then this is probably the perfect Hallmark movie for you this season. And if you want the album of the same name as a part of your holiday festivities, you can pre-order a limited-edition translucent green vinyl here.

Be sure to watch Christmas in Tahoe, premiering Sunday, November 28 at 6PM EST on Hallmark Channel. 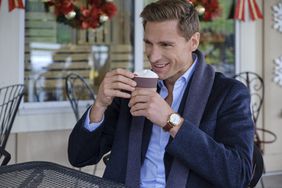 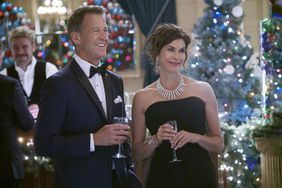 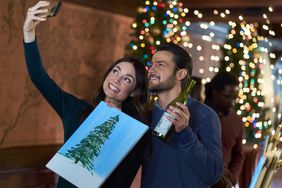 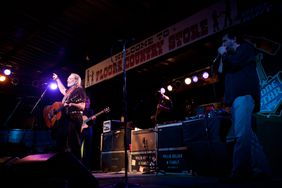