It seems that Garth Brooks finally paid the piper and got the tattoo he promised daughter Allie Colleen.

During a recent appearance on Country Countdown USA with Lon Helton Garth shared that he recently got inked to fulfill a vow he made back in 2014. Except instead of one tattoo, he ended up with several.

The country megastar initially promised Allie that he would get a tattoo when he headlined Croke Park in Ireland in 2014. When those shows fell through, he said he thought he was in the clear. But the matter came up again this year when he booked five nights at Croke Park in September.

"When we announced Ireland this year, she reminded me of my promise," Garth told Helton. "So with me forever, I'll take the five women in my life: my mother, my three daughters and [wife] Miss [Trisha] Yearwood, all in places on my body."

Though he's yet to show off his new ink, he pointed out their locations on Monday's episode of his weekly Facebook Live series, Inside Studio G.

"I love it… I know my three daughters have my back and are by my side 'til I'm in the grave," he continued. "But something about having them inked on your skin right here, by your side the rest of your life – [is] pretty frickin' cool. So my mother is on my shoulder, and Miss Yearwood is right here on my heart." 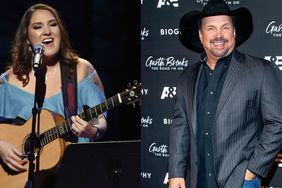