The bar and restaurant, Friends in Low Places, will be a place where “everybody’s got good manners.”

Garth Brooks is opening a bar and restaurant called Friends in Low Places in Nashville, and the country crooner has a very clear vision for the buzzy establishment.

"It's a classic honky-tonk," Brooks explained in a press conference Friday, per CMT. "It's what I grew up in. It's a bar along one wall, a bar along the other wall, and the rest is just space to dance or whatever you want to do."

The singer confirmed his plans to build and open a 40,000-square-foot, three-story "entertainment concept" in the former location of Paradise Park on Lower Broadway last month.

"We feel very lucky to have the chance to be part of Lower Broad, which is arguably THE hottest spot in the country," Brooks said in a statement back in March. "The goal is a classic honky-tonk that welcomes all and encourages love and kindness while playing the greatest music in the world in the home of Country Music!"

The father-of-three doubled down on the "love and kindness" aspect of his vision in last week's press conference.

"The main thing people care about when they go into a bar is the people," Brooks said. "My main push, from day one, is that they are sweet people. They are nice people. It's a house of love and a house you are safe in."

He likened the vibe to one found at a popular Georgia-based fast-food restaurant—where service is always a pleasure.

"I want the Chick-fil-A of honky-tonks," Brooks added. "I want a place where you go, where you feel good, feel safe and everybody's got good manners." 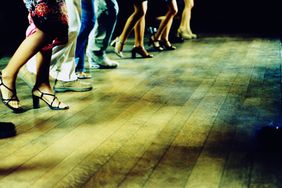