“We should pay more attention. We’re just mistreating Mother Nature—that’s like being ugly to your mama,” the legend told National Geographic.

Dolly Parton might be millions of dollars, a few decades, and a handful of Grammys away from her childhood in the Tennessee foothills of the Great Smoky Mountains, but her mountain roots are as strong as ever.

Parton and her 11 siblings were raised in a two-bedroom log cabin that had no electricity in an area was known as Mountain View. Some referred to it as Locust Ridge; her family just called it "over in the holler."

Today, the country music legend stands at the helm of hospitality empire in nearby Pigeon Forge. In a recent conversation with National Geographic Travel's Amy Alipio, Parton said that Dollywood, DreamMore resort, and her other endeavors are her way of introducing people to what she describes as "one of the most beautiful places in the world."

"When I come here it's a feeling like nothing else," Parton, now 76, told the publication. "It has grown, as all things must. But the Smokies will never lose their charm and their magic."

"We got the most radiant flowers, the biggest assortment of trees," she continued. "The Smokies have a heart of their own. It's the way the water flows, the way it sounds, and the way it feels when you get in it. I don't know if it's just because it's my home—but I really don't think so. I think it's just one of those special places that God put here for us to enjoy."

According to National Geographic, Great Smoky Mountains National Park is the "most biodiverse park" in the system. The Smokies alone boast more than 1,400 varieties of flowering plants and approximately one hundred species of trees—more than all of Europe.

It's easy to see why this remarkable place means so much to Parton. The Smokies have inspired some of her best music, including "My Tennessee Home," which became one of Tennessee's official state songs in 2021.

With Earth Day approaching, Parton said hopes her message about loving, respecting, and caring for the environment rings more clearly—in the Smokies and beyond.

"We should pay more attention. We're just mistreating Mother Nature—that's like being ugly to your mama," she told National Geographic. "We need to take better care of the things that God gave us freely. And that we're so freely messing up." 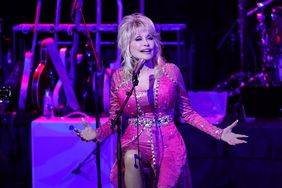