It wasn’t exactly love at first sight for the cute country couple.

As you may or may not know, Luke Bryan met his wife Caroline Boyer Bryant almost 25 years ago while in college at Georgia Southern. It was the fall of 1998, and they both happened to be at a local hangout called Dingus McGee's. And while we now know that their epic love story would lead to a happy 15-year marriage, Caroline wasn't so easily convinced—at least at first.

In a video interview series with Jockey called "Intimate Moments," the loving couple and Jockey brand ambassadors opened up about their first impressions of each other and how they each remember that fateful night.

For Luke, Caroline was the only girl in the bar. "I'm sitting there, and she walks in. And it was packed, so you gotta figure out how to navigate through the crowd. You gotta figure out your angle. What are you going to do? What's your main move?" he remembers.

Luke made a beeline for Caroline, and the two struck up a conversation. By the next morning, Luke had made up his mind. "I was like 'Oh my God. That's who I'm going after right there,'" he said.

Caroline, however, was a little less certain. "Just this big personality with this loud mouth comes up," she said. "It took me a couple days to realize this is his real character. This wasn't just some drunk college guy. This is how he acts."

Eventually, Caroline fell in love with that same fun-loving personality and was even the first between the two to say "I love you." Today, the college sweethearts are as in love as ever. And it seems Caroline has more than warmed up to Luke's ridiculous antics. The couple is known for holding a hilarious prank-off each holiday season that's appropriately named Pranksmas.

WATCH: Luke Bryan Changes Tire for Mom Stranded on Side of Tennessee Road

We wish the happy couple many more years of wedded bliss—and lots and lots of laughter! 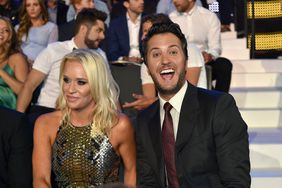 It's Officially "Pranksmas" at Luke Bryan's House, and Tim Tebow Is in on the Hijinks