It's not just Wetumpka residents who benefited from Ben and Erin Napier's valiant quest to restore the Alabama town. With every episode of Home Town Takeover, viewers learned something new from the HGTV super-couple.

In one particular episode of the hit series, "Say Yes to Wetumpka," Erin and Ben took on two big projects: the Wetumpka Civic Center and a family home in need of some modern updates.

Robert and Kim Rose's house has an open-door policy. As the go-to gathering place for their two teenagers and their friends, it was important to them that their home be a comfortable and welcoming space for entertaining.

"Their house is the hub for the neighborhood kids," Ben explained.

Parents know that that can mean only one thing: providing food and lots of it.

Fortunately, the Roses had a big kitchen, although Erin and Ben wondered if it might even be too big. In order to maximize all that space (along with its snack-dispensing potential), Ben decided to build a kitchen island with plenty of drawers for treats of all shapes and sizes.

"That way, the kids can grab something to eat while they're working on their homework or playing basketball," he said in the episode.

Because Erin and Ben know that the most important part of a kitchen in a home brimming with kids is room for snacks.

We can't argue with that! 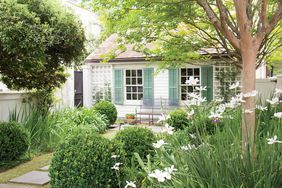 Small Backyard Ideas To Create The Space Of Your Dreams