Plus she shares her thoughts on how Dawson’s Creek ended.

For a certain generation of Americans, Mary-Margaret Humes was America's Mom. In the late 90s and early aughts she starred in Dawson's Creek as Gayle Leery, Dawson's mother. She's now carrying on that cool mom vibe in her latest role as Alice, surrogate mom to Ryan Paevey's Josh Wyatt in Two Tickets to Paradise on Hallmark Channel. In a recent phone call with Southern Living, Humes said, "I'm not a mom, I just play one on TV."

The absolutely hysterical rom-com tells the story of two strangers, Josh Wyatt (Paevey) and Hannah Holt, played by Ashley Willams who were both left at the altar on the very same day. During a chance meeting on what should have been their wedding days, Hannah and Josh decide they should both go on the honeymoons they've planned, solo. They shake on it and part ways, only to then bump into each other at the airport at the same gate. They are both going to Hawaii and yes, they both end up at the same resort. What ensues is a quick-witted, slapstick, hilarious adventure that will have you deep belly laughing out loud. Plus, some pretty great scenery since they filmed the movie on location in Hawaii.

When they arrive in Hawaii, Josh tells Hannah he has a family friend who lives on the island. Enter Humes as Alice. The veteran actress told us that she'd passed on a few scripts early on during the pandemic, but when this script came her way, she jumped at the chance to work with this dynamic duo.

"I see that it's Ashley Williams. She's just so phenomenal. There are just not enough words to explain how effervescent she is. She had me at hello." Humes continued, "she's just like this sparkling, adorable, quick-witted, Energizer Bunny. She's got impeccable timing. We were on set so many times just in stitches. I mean what a joy to work with her."

"And then Ryan, my god. He's delightful, he's charming, he's charismatic. He's just so charming and he's a great storyteller," Humes said of her other co-star.

She admits that a lot of the humor in the movie happened because they gave each other room to play with the material, with Williams leading the way. "The thing about Ashley, you just want to keep the camera rolling because you just never know what is going to happen. She's so good. She's so present and she's so quirky and she's so beautiful and so loveable. So yeah. Some of our things were improv and you really have to hold your tongue. It's like, 'oh! hey there she goes, bite the inside of your cheek. Don't laugh.'"

"I think yeah one of the things that makes this so magical is the chemistry between the two of them.[Williams and Paevey] And trusting them that whatever one person said, the other guy was going to go along with it and see where it went," she said.

Of course, speaking of on screen chemistry, we couldn't let Humes get away without asking her for some behind the scenes intel from her days in Willmington filming Dawson's Creek. While she played Dawson's mother, Humes admits in the end she was Team Pacey. "I love my kid but I think it ended the way it was supposed to end." But she shared with us that she doesn't feel that way about how Gayle and Mitch's storyline played out. If you need a refresher, and spoiler alert if you've never seen Dawson's Creek, (What are you waiting for?) Gayle, Dawson's mother had an affair early on in the show but by the final seasons she and Dawson's father Mitch had reconciled and had a new baby girl. Then they killed off Mitch. This was something Humes was not happy to hear about.

"When I heard they're going to kill your husband, I'm like no you're not! You are severing my right arm. I am going to lose a limb. My heart will be broken." Humes shared that she and the actor who played Mitch, John Wesley Shipp, were then and are still close friends to this day. "We talk once a week. He comes here, he stays at my house. I go back to New York, I stay with him. So we were just kindred spirits on that show."

She continued, "in the final, final episode they have me getting married to somebody else! And I'm like no, do not do that. They just needed a reason for everyone to come back to Capeside. I {said} don't use me that for this reason. Mitch was my soulmate."

But regardless of how the series ended, Humes has warm memories of her time on the Carolina coast and remains close with her Dawson's Creek family. She told us she keeps in regular contact with several cast members including Shipp, James Van Der Beek, and Katie Holmes.

We don't know about you, but we find that a comfort to know. 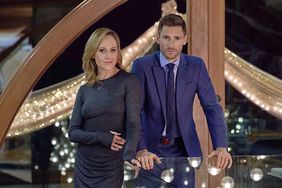