When there's a challenge, 10-year-old Aaliyah Svec rises to meet it. So, when the young wrestler was given the choice between wrestling against kids her own age in the youth division or leveling up and competing at the middle school level, she chose the latter. Because there's no girls' division at this level, it meant Aaliyah would be taking on boys three and four years older than her.

No stranger to the mat, Aaliyah has been wrestling since she was only 4 years old. When she competed in the Kentucky Middle School State Finals on March 5, she was the only girl out there, but through hard work and persistence, one by one she took down her opponents.

"She pinned her first opponent in 19 seconds," her father Chris Svec told Southern Living. "She pinned her second opponent after scoring 14 points on him. Her third match was the talk of the tournament. Her third match was a 7-7 match and went into overtime. She overcame her opponent in overtime making it a 9-7 win. When the referee called the points, it was evident from the applause the spectators were excited for her. This 10-year-old girl just beat 13 and 14 year old boys to get to the finals.

When it came time for the finals, Aaliyah fought hard and ended up taking home second place.

For Chris, who said the day was a "rollercoaster of emotion," the tournament was about so much more than winning or losing.

"The pride I felt for her when they lined up all the kids for their final bouts and announced their names," he wrote on Facebook. "Aaliyah was the only girl out there in a sea of older boys. She felt nervous and awkward, but full of confidence and never felt like she didn't belong. Someday she wants to be a role model for younger female wrestlers, just like the big girl wrestlers she looks up to now."

And she's well on her way to accomplishing that goal. Inspired by her older sister, 8-year-old Amelia Svec is both a youth state champion and youth national champion. Aaliyah is also working with her coach at NKY Martial Arts Academy to start an all-girls session to encourage more girls to try the male-dominated sport. 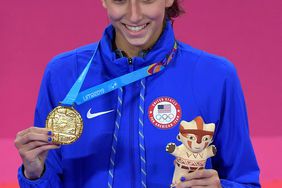 Southern Olympians to Watch: This Florida Taekwondo Star Kicked and Punched Her Way to Tokyo