The lanky bird told the gator to get off its turf, in no uncertain terms.

A sandhill crane was recorded showing an alligator who's boss at a Florida golf course last month.

David Scot Schultz filmed the wild encounter at Eagle Creek Golf Course in Orlando on March 24. He told Storyful he watched the alligator walk across the 18th fairway and head toward a pond.

"The sandhill crane was following the alligator across the fairway, which I didn't think was a good idea," Schultz said.

Now, we're hardly animal behaviorists, but if we had to guess, the crane is telling the alligator to "get off its turf," that it has "worn out its welcome" and that it "messed with the wrong long-necked bird." Who knows, maybe the gator had one too many with lunch and needed help finding its way home.

Sandhill cranes stand almost four feet tall and are a common sight at Florida golf courses. According to Florida Fish and Wildlife Conservation Commission, Florida sandhill cranes are a non-migratory and nest in freshwater ponds and marshes. Known for their elaborate courting dances, they are monogamous and raise their chicks together, taking turns incubating.

Florida sandhill cranes typically breed from February through April. They are most likely to react aggressively to predators during nesting season. They will often hiss with their wings open, and bills pointed.

If we were to continue our guessing spree, we'd wager that this unlucky gator waddled a little too close to this crane's youngsters.

We hope there's no bad blood between them! 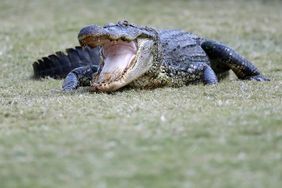