"It would be kind of like seeing a penguin show up at Wrightsville Beach, it's that out of the ordinary."

Since early February, birders and wildlife enthusiasts from across North Carolina have been flocking to Wrightsville Beach in Wilmington. No, it wasn't a great egret or blue heron they were chasing. But rather, a charasmatic little guy named Rocky. Rocky is a mountain bluebird, a species that's normally found in the mountains and higher elevations of the West Coast, from Alaska through Canada and the Western United States, all the way down into central Mexico. Rocky's appearance on the eatern coast of North Carolina is a once-in-a-lifetime occurrence.

"It would be kind of like seeing a penguin show up at Wrightsville Beach, it's that out of the ordinary," birder Dorothy Sutherland told The Charlotte Observer. Sutherland, who is also nature photographer, shared some snapshots from her rare sighting with the "Bird Watching N.C." public group on Facebook.

The last time a mountain bluebird was reported in North Carolina was nearly 40 years ago at the Biltmore Estate in Asheville. However, unlike Rocky who has been photographed by dozens of amateur and professional wildlife photographers, the one seen in 1985 was never photographed, earning it an asterisk classification as "provisional," according to Birds of North Carolina, an online annotated bird checklist.

So, what is Rocky doing so far away from home? According to Curtis Smalling, director of conservation for Audubon North Carolina who spoke with Star News Online, storms, blustery weather, and disturbances in a bird's internal navigation system are all probable reasons for his trip to the east coast. As for how long he'll stay, that's also unknown. It's possible that when the weather warms, Rocky will head north with the rest of his species who are currently wintering across Arizona, New Mexico, and Mexico.

For now, North Carolina birders are thanking their lucky stars for the opportunity to spend some time with the photogenic bird before his journey home. 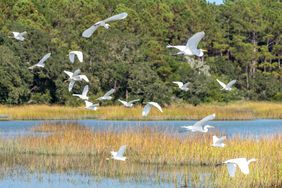 The Best Spots for Birdwatching in South Carolina