The sighting spells success for a program aimed at reintroducing the Eastern indigo snake to its native habitat.

While many run the other way when coming across a snake in the woods, wildlife experts in Alabama are jumping for joy after spotting a rare species in the wild for only the second time in 60 years. Last Wednesday, a wild-born Eastern indigo snake was found in the Conecuh National Forest in Southern Alabama.

The exciting discovery is a result of the Eastern Indigo Project, a program created in 2006 to reintroduce the diminishing species to its native land in Alabama. The newly found snake is proof that the program is doing its job. From 2010 to 2020, the project facilitated the release of 170 captive-born Eastern indigo snakes into the Conecuh National Forest. This is only the second documented product of natural pairings to be spotted in the area since then, with the first making its debut in January of 2020.

"It's proof that what we are doing through reintroduction is working and that captive snakes are acting like wild snakes after they are released," Tricia Wood, Habitat and Species Conservation Coordinator with the Alabama Wildlife and Freshwater Fisheries (WFF) Division, said in an interview with Outdoor Alabama.

The non-venomous Eastern indigo snake is an icon to the southern longleaf pine forest. With an average length of 7 to 9 feet, it is the largest native snake on the continent. As an apex predator, it plays an important role in keeping a healthy and balanced ecosystem. Eastern indigo snakes once thrived throughout Florida, Georgia, Alabama, and Mississippi, but habitat loss caused the species to become largely extinct in Alabama by the 1950s.

With a goal to release a total of 300 snakes into the Conecuh National Forest, the Eastern Indigo Project is working to rectify the issue. The hope is that the reintroduction will improve the species' chances of establishing a viable population.

Partners in the project include the Auburn Museum of Natural History and Auburn School of Forestry and Wildlife Sciences, who head a monitoring effort to track the snakes' progress. The U.S. Forest Service, U.S. Fish and Wildlife Service, Zoo Tampa, Zoo Atlanta, the Georgia Department of Natural Resources and the U.S. Army's Fort Stewart, as well as the OCIC at the Central Florida Zoo, where the captive indigo breeding and health care are handled, also contribute to the monumental effort.

WATCH: The Exciting Conclusion to the Python Snake Running Wild in a Baton Rouge Shopping Mall

"The snake found yesterday indicates that the project is resulting in some thriving and reproducing indigos—just what we wanted!" the Alabama Wildlife Freshwater Fisheries Division wrote in a Facebook post on March 17. "Reintroducing a species to its native range is a daunting task, and we celebrate each step of its success!" 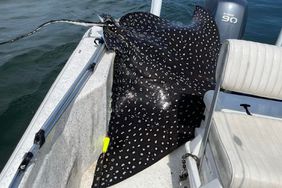