Beachgoers are being advised to watch where they step along the Gulf Coast. Purple flags are flying from Fort Morgan, Alabama, to Panama City, Florida, due to the presence of a frightful new species of jellyfish known as pink meanies.

Dauphin Island Sea Lab Marine Biologist Brian Jones told WPMI this happens on Gulf Coast beaches about every 10-12 years. They are currently being drawn to shore by an influx of their favorite snack: moon jellyfish.

"When they show up, they're definitely impressive and get a lot of attention," said Jones.

The Drymonema larsoni, commonly known as pink meanies, were first observed in the Gulf Coast in 2000. Scientists identified it as an entirely new species in 2011.

These pretty pink jellyfish are carnivorous and have stinging tentacles that can reach up to 70 feet long. A pink meanie weighing upwards of 50 pounds was documented on Dauphin Island in 2000.

"Studies have found that they will voraciously feed on large aggregations of moon jellyfish that periodically bloom in the Gulf," FWC Fish and Wildlife Research Institute explained on Facebook. "In fact, the pink meanie may be better adapted to feeding on moon jellyfish than all previously studied moon jellyfish predators."

Though they are considered not dangerous to humans, their sting can be quite painful. 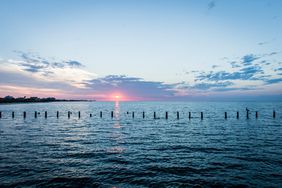