"I've been catfishing all my life and I never dreamed of something like this."

A Mississippi man reeled in a 131-pound blue catfish that not only set a new state record, but possibly a world line class record as well.

Eugene Cronley was fishing a 90-foot hole in the Mississippi River near Natchez on April 7 when his rod bowed over. He told Mississippi Clarion Ledger that the fight began just five minutes after his skipjack cut-bait hit the water.

"We had to untie the boat and float down the river," Cronley told the paper. "I couldn't move him. I'd pull on him and take in a foot of line and he'd pull and take 10 feet. I just sat there like I was hung up."

It was clear that whatever was on the end of his 30-pound test line was big.

"We catch a lot of 50-pounders down there and I knew he was bigger than that," Cronley recalled. "We didn't know until we pulled him up. We knew then we had a monster."

Back home in Brandon, Cronley's scale indicated the giant fish weighed 138½ pounds, demolishing the state's existing blue catfish record of 95 pounds. Now all he needed was a certified scale big enough to weigh the fish.

"You can't believe how hard it is to find certified scales to weigh a catfish that big," Cronley told the Clarion Ledger.

Cronley eventually took it to Van's Deer Processing and Sporting Goods in Rankin County, which had a certified scale up for the task. After three days on ice, the fish weighed in at 131 pounds.

Mississippi Department of Wildlife, Fisheries and Parks biologist Ryan Jones confirmed the scale was accurate and certified the state record on Monday.

Whether or not Cronley broke the world record for a blue catfish caught on 30-pound test line (111 pounds) will take a little bit longer to determine. But for now, he's happy to have smashed one record.

"That's unreal," Cronley told the newspaper. "I've been catfishing all my life and I never dreamed of something like this." 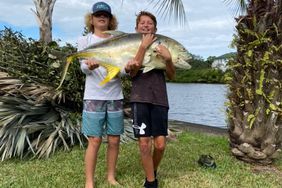 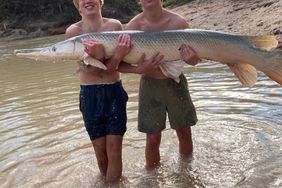