“The Kemp’s Ridley sea turtle is one of the most endangered sea turtle species in the world so every egg matters.”

Egg-citing news for an endangered species in Texas!

Experts with Turtle Patrol and the Gulf Center for Sea Turtle Research quickly transported the nest to the incubation facility at Padre Island National Seashore where they have a much higher chance of survival.

Dr. Christopher Marshall, Professor of Marine Biology at Texas A&M University at Galveston, and Director for the Gulf Center for Sea Turtle Research, explained in a news release that the eggs would have only a 45 percent chance of survival if they were left on the beach. In the incubation facility, however, survival rates rise to about 95 percent.

"The Kemp's Ridley sea turtle is one of the most endangered sea turtle species in the world so every egg matters," Marshall said. "A lot of nesting habitat for the Kemp's Ridley has been lost to storms, high tide and predation, which is why it is important to transport these nests to an environment where they have the best chance for survival into adulthood."

The turtle nearly went extinct in the 1980s, and subsequent efforts to boost their population have achieved mixed results. The Kemp's Ridley, the smallest of the sea turtle species, primarily nests on the Texas Gulf Coast. Padre Island National Seashore announced its first Kemp's Ridley nests of the season in late April.

Typical nesting season for the Kemp's Ridley Sea Turtle runs between April 1 and July 15. People who find a nest are urged to call the Sea Turtle hotline at 1-866-TURTLE-5 and stay at least 60 feet away. 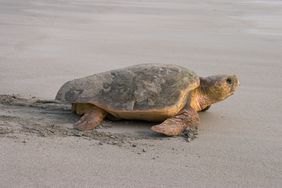 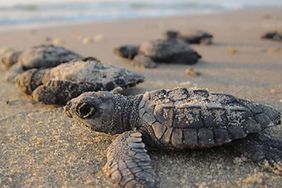 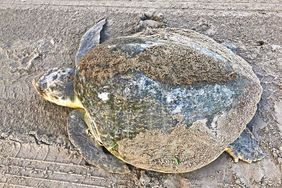 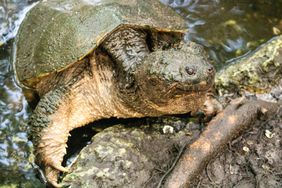 According to the U.S. Fish and Wildlife Service, the Popularity of Turtle Soup Could Lead to the Decline of the Alligator Snapping Turtle