Officials say he had “become habituated to human and unnatural foods.”

A giant 500-pound black bear has been safely relocated after spending years roaming around residential neighborhoods near Tusculum University in Greenville, Tennessee. According to the Tennessee Wildlife Resources Agency (TWRA), who have kept tabs on the bear known as Big Bruin over the years, the nuisance bear had become habituated to human and unnatural foods.

In a Facebook post from the agency, Wildlife Sgt. David Carpenter said Big Bruin had regular access to garbage, birdseed, and pet food over the past couple of years. Last year, the naughty bear ramped up his activity, causing significant property damage. Due to the increased potential for negative interaction, the agency intended to capture the bear last year, but were ultimately unsuccessful because Bruin changed his travel patterns.

Recently, Bruin has been up to his shenanigans again, and last Thursday TWRA officials spotted him in a small vacant wood lot. Seizing the opportunity, they free-range tranquilized the bear and relocated him with the help of the Greenville Fire Department.

After giving Bruin a full work-up to assess his health, the TWRA and Greenville Fire Department worked together to transport him to a remote area of the Cherokee National Forest, where he can thrive away from the influence of unnatural elements.

According to the TWRA, nuisance bear complaints rise in late March and April when bears emerge from their winter dens and natural food is scarce. Lured by the smell of food from garbage cans, they often gravitate toward residential areas where they come in contact with humans.

WATCH: Watch This Mama Bear and Her Cub Have the Time of Their Lives on an Asheville Playground

We wish Big Bruin nothing but the best in his new mountain home! We've got our fingers crossed for all-you-can-eat berries and plenty of great views. 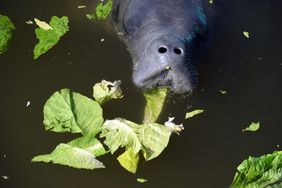