What is it about a love story that makes us turn the pages faster? We're always in the mood to read a new book, and over the years, we've read stories about romance set across the country and across the world. We've also found that small-town romances set in the South can always be counted on to up the charm factor. We've gathered a few new ones for you to add to your reading list this season. Some are by debut writers, others are by tried-and-true romance authors whose books we've seen on the shelves for decades. In either case, read these small-town romance novels for love stories set in close-knit communities, and you might just find a new favorite to add to your bookshelf.

Under the Bayou Moon by Valerie Fraser Luesse

A story with heart and a strong sense of place (it's set in the swamps of southern Louisiana in the small town of Bernadette), this book has a plot that will capture you, a romance that will charm you, and a setting that will stay with you long after you've turned the last page.

Set on the Gulf Coast in Sweet Bay, Alabama, this new book from Lauren K. Denton is about starting over in a new place, finding fresh beginnings in hardship, and the possibility of love after heartbreak.

The Memory Keeper by Jenny Hale

When her grandmother falls ill, the main character of this novel returns home to Franklin, Tennessee, to be with her family, though it also means encountering several people from her past.

This popular Emily Henry novel tells the story of a literary agent and a book editor who are thrown together over the course of a month in Sunshine Falls, North Carolina.

The Return by Nicholas Sparks

An surgeon injured in the service returns to New Bern, North Carolina, where he encounters locals with secrets, including those of a deputy sheriff he feels deeply connected to.

A Ballad of Love and Glory by Reyna Grande

A dispute over the Río Grande boundary along the U.S.-Mexico border brings together a Mexican army nurse and an Irish soldier during a tense 1846 conflict in Reyna Grande's moving new historical novel.

Things We Never Got Over by Lucy Score

After running away from her wedding, Naomi gets stuck in Knockemout, Virginia, dealing with her twin sister and a niece she didn't know she had when she encounters Knox, a loner with no tolerance for runaway brides.

Bet On It by Jodie Slaughter

This new novel is set in the small town of Greenbelt, South Carolina, where Aja Owens and Walker Abbott meet–first in the Piggly Wiggly, then at bingo–and strike up much more than friendship.

If You Ask Me by Libby Hubscher

Set in North Carolina, this rom-com follows an advice columnist (Violet Covington, who's behind Dear Sweetie, the most popular column of its kind in the state) as her life takes a turn towards the unexpected.

When in Rome by Sarah Adams

A spin on the classic film Roman Holiday, this novel is set in Rome, Kentucky, where a stranded visitor and a local baker find love in the small town.

Bookshop by the Sea by Denise Hunter

This small-town love story is set in Piper's Cove, North Carolina, where a sister's wedding day coincides with an impending hurricane and high school sweethearts are thrown together during the storm. 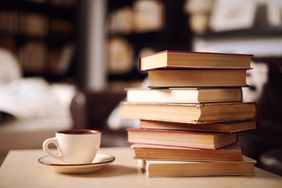