The legendary musician joins us on our new podcast Biscuits & Jam.

On this episode of Biscuits & Jam, we talk to country icon Wilie Nelson about his growing up in Abbott, Texas, his love of gospel music and chicken fried steak, his relationship with Patsy Cline, his efforts with FarmAid, his new album First Rose of Spring, performing with his kids, and staying positive during tough times.

During the podcast, Willie was sitting in his pickup truck at his ranch in Luck, Texas, looking at his horses (he has over 70 of them). There are worse places to be quarantined, but Willie is ready to get back on the road again. When asked if he missed being on his bus, the Honeysuckle Rose, he laughed. "Well, I miss it a lot," he said. "It's parked right down at the bottom of the hill, and I go down there and sit on it a while and pretend I'm going somewhere." Tune in to hear all this and more on this episode of Biscuits & Jam.

Get to Know Willie Nelson

Willie Nelson is a legend, pure and simple. In fact, we think it's safe to safe that he is the living embodiment of country music. His influence has spread over decades and generations, to every corner of the globe, and to his own children. Willie Nelson was raised by his grandparents in Abbott, Texas, and he became infatuated with music, both on the radio and at church at an early age. After moving to Nashville in 1960, he was soon writing songs that became massive hits for Patsy Cline, Roy Orbison, and Ray Price, among others. The 70s and 80s saw Willie cementing his place as one of the world's most beloved performers.

Since then, songs like "On The Road Again" have become synonymous with country music. So much so, that it's hard to imagine a world without them. On top of 10 Grammy wins and over 52 career nominations, Willie is on Rolling Stones' list of the 100 Greatest Singers of All Time, and has been honored by the Library of Congress for his contributions to popular music. His new record, First Rose of Spring, came out in July of 2020 and marks his 70th album release.

What Willie Nelson Talks About in this Episode

"The first music I learned to play was gospel music and Amazing Grace. It was one of the first songs I learned to sing, and this kind of music has kind of carried me through the years."

Willie Nelson, On His Military Service

"I was at Keesler Air Force Base for a while, and...the top Sergeant in there...liked music, so we would play little concerts for him, and he loved it."

—Willie Nelson, On His Military Service

"Tootsie was a great friend of mine, and she had a hatpin, and if you gave her any trouble she's run you out of there with that hatpin. So you had to stay halfway straight."

"There's nothing like having your kids on stage with you, especially when they're good."

"These folks are heroes. These are the ones that...are on the front lines battling one of the biggest wars, I guess, that this country has ever had to face because there is no visible enemy."

Get a transcript of the full interview with Willie Nelson. 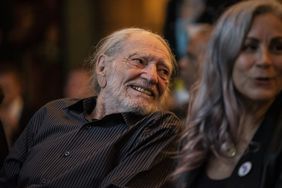