Ben Mims is a food writer, cookbook author, and recipe developer. He is a cooking columnist for the Los Angeles Times. He worked as the Test Kitchen Director at Lucky Peach magazine, Food Editor at Saveur magazine, a food editor at Food & Wine, and the pastry chef of Bar Agricole restaurant in San Francisco in 2013. He is the author of three cookbooks: Air Fry Every Day: 75 Recipes to Fry, Roast, and Bake Using Your Air Fryer (Clarkson Potter, 2018), Coconut (Short Stacks Editions, 2017), and Sweet and Southern: Classic Desserts with a Twist (Rizzoli; 2014), in addition to recipe development for Tasty Ultimate: How To Cook Basically Anything (Clarkson Potter, 2018), Matcha: A Lifestyle Guide (Dovetail, 2017) and Munchies: Late-Night Meals from the World's Best Chefs (Ten Speed Press, 2017). He has contributed to the Wall Street Journal, GQ.com, Jarry, Lucky Peach, Epicurious.com, Rachael Ray Every Day, Real Simple, Southern Living, and Food52.com. 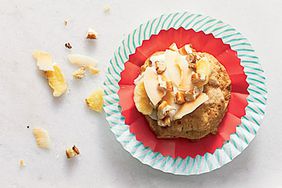