Alan Jackson has a lot of titles to his name. He’s a Grammy winner, CMT's Artist of a Lifetime, and CMA’s Willie Nelson Lifetime Achievement Award winner, just to name a few. But the country star has a new title that he might just love even more: Grandfather.

Jackson’s daughter, Ali, and her husband Sam Bradshaw welcomed Jackson Alvie Bradshaw to the world early this month on December 13, and Jackson couldn’t be more thrilled. Plus, the timing was perfect—the little boy made his arrival just in time to help his grandparents celebrate their 43rd wedding anniversary.

"Denise and I are celebrating our 43rd wedding anniversary with our new grandson Jackson Alvie Bradshaw," Jackson wrote on Instagram. "So happy that this little guy has made us grandparents!" While “travel” is the traditional anniversary gift for marking 43 years together, we’ll allow this one. Plus, they’ll undoubtedly be traveling to see the kiddo a lot!

Now that he has a grandchild, Jackson just needs to decide what his exact nickname will be.  After all, Southern grandfathers have a lot of excellent options to choose from! Will he opt for something traditional like “Grandpa” or “Grandfather” or even “Granddaddy” or will he test out some newer variation like “Pops, “PeePaw”, “Gampers”, “Pop Pop” or “Gampy”? Whatever name he chooses, it will undoubtedly be the best title he has. 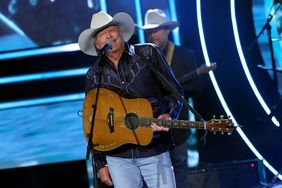